People have been eating honey since there were people, or honey bees, whichever happened to come second. A cave painting in Spain that’s over 8 thousand years old shows honey being harvested. It’s been used for food and medicine all over the world. 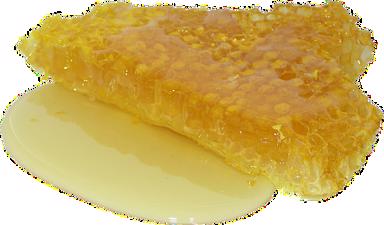 Honey is produced by honey bees. Though there are several other types of bees and even some ants and wasps that produce types of honey, these other insects do not produce a surplus, don’t live in large colonies and are difficult if not impossible to manage for any type of meaningful honey harvesting. The honey produced by these other insects is different in texture and taste than the honey made by true honey bees.

The western or European honey bee (Apis mellifera) is the most common of the 7 – 12 species of honey bees. There are over 20,000 bee species, but only honey bees make a surplus of honey that is easily harvested. See more on honey bees here.

Bees collect nectar from a wide variety of plants. They add enzymes and store it in cells in the honeycomb, The bees will then allow the water content of the honey to get down to about 18%, often using their wings to fan the honey and speeding up the process. Once the water level is correct the bees will seal the cell.

Unlike most other varieties of bees, a honey bee colony will live through the winter, and use their stored honey as food when there is little or no nectar available and during the cold months when they are not able to venture outside the hive. They generally store a surplus of honey which beekeepers like us will harvest. Most microorganisms do not grow in honey, so properly store honey does not spoil, ever. 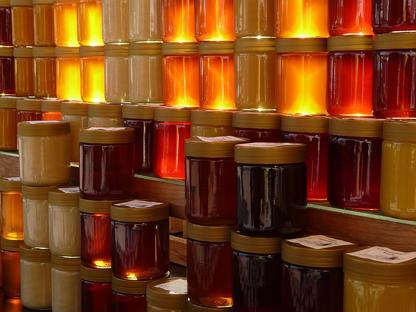 The color, aroma and flavor of honey varies depending on the nectar source or sources the honey bees have visited. It can range from nearly clear and very light tasting to amber or near brown in color and strong in taste. There are over 300 unique types of honey available in the U.S.

Much of the honey available in stores is not actually true honey. It may have started out as honey, but much of it is imported from China, often coming through other countries. The Chinese are notorious for adding syrups and other fillers to their honey. Though, of course, you’re not going to read that on any labels. If you want to be assured that you’re buying and eating pure honey you’re best to purchase from local beekeepers.

A honey bee will visit between 50 to 100 flowers during a single collection flight. Over its lifetime a single honey bee will produce about 1.5 teaspoons of honey. A colony of honey bees will fly about 55,000 miles to produce a pound of honey.

Honey is natural and naturally sweet. You can often substitute honey for sugar when baking. Each variety of honey is different, so you’ll need to adjust for taste. There are some general rules for substituting honey for sugar.

Since honey can be two to three times sweeter than white sugar (depending on the variety) you’ll want to use less honey than sugar. The general rule is use 1/2 to 2/3 cup of honey for every 1 cup of sugar called for.

Honey is about 18% water, so you’ll probably want to reduce the amount of other liquids in your recipe. Generally reduce other liquids by a total of 1/4 cup for every 1 cup of honey used.

If your recipe does not include baking soda you may want to add some to balance out the natural acidity of honey. For every cup of honey used add 1/4 teaspoon of baking soda.

Since honey has a high sugar content it caramelizes and burns faster than sugar. So to make sure your baked goods using honey don’t brown too quickly, reduce oven temperature by 25°F.

We’ll be adding recipes that feature honey in the near future. Keep checking back.